Alongside the European Investigative Collaborations network, we have identified a new company specialised in the timber business in the Central African Republic related to the Wagner/ Prigozhin galaxy. What was our research process? How did we do it? Here we detail our open source research methodology and approach to investigating Wagner mercenaries where they operate. 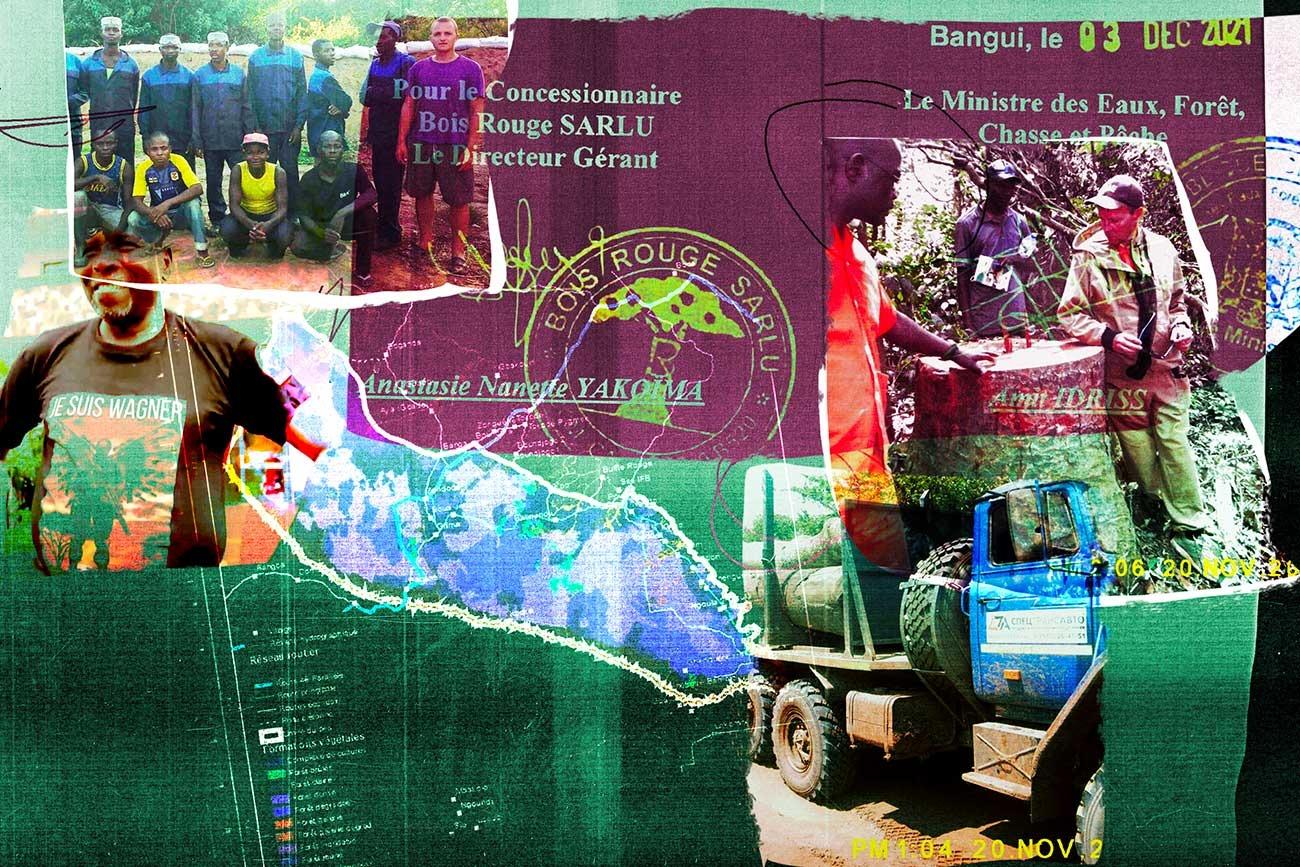 No smoke without fire: verifying rumours about a forestry business in CAR

At the end of 2021 rumours propagate on social media that Wagner mercenaries have branched out into the timber business and are exploiting a forest. This information is even published by national newspapers without details.

Our starting assumption is that if Wagner mercenaries are into exploiting woods on an industrial scale, they could have a dedicated plot. To verify this rumour we look for any data available related to forest concessions in CAR. With luck we found an up to date website of a CAR/ EU joint project which lists forestry projects and concessions. On September 9th 2020, a tender (to be submitted on October 23rd 2020) opened for a forestry exploitation permit in the Lobaye region at the following coordinates 3°46’ and 4°21’ North latitude, 16°48’ and 17°30’ North latitude with a size of 137 ha.

This permit used to belong to a local company, Société Industries Forestières de Batalimo headed by Laurence Nassif. The permit was canceled by a June 18th 2020 decree. On February 9th 2021, a permit with the same coordinates was allocated to a new company – Bois Rouge.

The plot is located  in the prefecture of Lobaye, below Boda and next to Boganda. We can actually see the Ngotto forest being located within Bois Rouge’s plot. It is part of the Congo Basin, housing some of the largest undeveloped tracts of rainforest in the world.

Bois Rouge does not have the track records of well established timber companies in CAR like IFB, SEFCA or Rougier. It does not appear either on the certified companies list mentioned on the initial website.

Around the same time the concession was allocated to Bois Rouge in February 2021, we can find multiple reports of a military operation launched by the FACA (Central African governmental army) and supported by Wagner group in several cities located in the Lobaye region to remove rebel armed groups opposed to the central government. For the past few month, the city of Boda, among others, has been controlled by the CPC– Coalition des Patriotes pour le Changement – headed by François Bozizé, an opponent to President Touadéra and created in the wake of the 2020 election by the merger of four Seleka rebel armed groups and 2 anti-Balaka rebel armed groups.

On January 24th 2021, a man who is to be a military from the FACA special unit (GSPR Unit/ Groupe de Sécurité de la Présidence de la République (Security Group of the Republic Presidence)) posts they are near Boda city and ready to launch the assault. On his Facebook account we can see him wearing a Wagner insignia on his military uniform. For his safety, we won’t post a link to his page.

On January 25th 2021, he posted that Boda had been freed by the FACAs and Russia.

According to the testimony of Aimé Barthélemy Pilapete mayor of Boda for Radio France International, Boda had been emptied two days ago and there was no fight while FACA and Russian forces entered the city. Some photos of the FACA and Russian Wagner group entering the city are posted online on Facebook and TG  (old channel: see Twitter).

Military progresses are also documented on the CAR government social media account in the following days and weeks. Villages like Bossembélé get into the control of the FACA supported by the Russian mercenaries.

We know for sure Wagner mercenaries were in control of Boda and its areas by the time Bois Rouge was awarded the forestry concession tender.

According to data obtained by EIC/OpenFacto, Bois Rouge SARLU was created on March 22nd 2019 and is headed by a national Central African woman. Located at this address: Bangui 4ème Ardt 4ème Ardt Gobongo 6, Kangamongoulou , its activity is timber production and export.

Its website – offline at the time of writing – indicates the company is in Bangui and gives an email address.  All seems pointing at CAR.

However, when we look at the email address, we find that Bois Rouge was registered at the Shanghai exhibition “Together Towards Global Green Supply Chains: A Forest Products Industry Initiative” in October 2019.

At this time, Bois Rouge is presented as a Russian company selling wood from Central Africa with two representatives: Artem Tolmachev as the Commercial director and “Mike” Vdovin with a personal email address.

Here the company is identified as a Russian company located at the same address in CAR.

While we cannot go further in investigating these two individuals in open sources, we get more evidence that Bois Rouge is more Russian than African. Thanks to photos obtained by EIC/OpenFacto we can see many white Caucasian men working at the Bois Rouge concession along with a lot of Russian equipment.

Linking it to the Wagner/Prigozhin galaxy: import data

Bois Rouge is importing a lot of goods from Russia. Not only we see it on photo but we can find import/export data regarding Bois Rouge with around 290 imports of equipment made by the company to CAR to Russian or Ukrainian companies. Most of them are heavy machinery or parts companies. 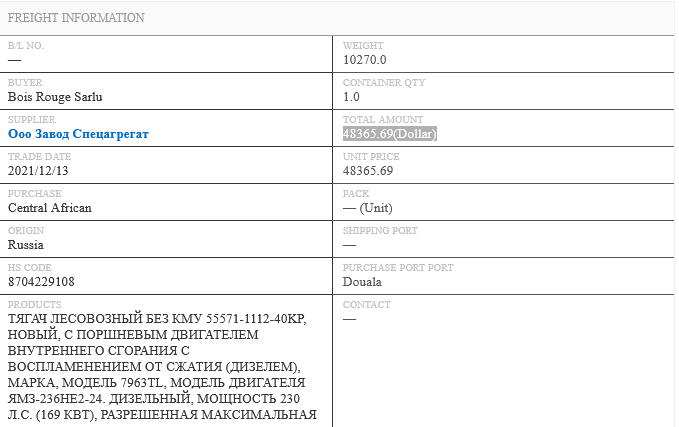 ​In addition and over the course of 2021 and 2022, trade data shows 28 transactions were conducted between Bois Rouge and Broker Expert. This Russian company located at 196084, St. Petersburg, Tsvetochnaya, D.6 Liter M, Room 3n, is known to be trading with other Wagner/Prigozhin entities, especially Meroe Gold in Sudan .

According to the Dossier Center, C4ADS and other expert outlet, Broker Expert LLC do pay a role in structuring Prigozhin’s businesses either through financial loans or equipment exports. The company does appear to play a role in sourcing specific equipment and re-exporting them to Prigozhin’s operational entities.

This phone is also linked to a number of entities, among which AGAT LLC, MUZEY CHOCOLAD LLC, MONOLIT LLC, MAGAZIN KUPSOV ELISEVYKH LLC and  SOINVEST LLC with Liubov Valentinovna  Prigozhina as owner and director; Lakhta Plaza LLC and Lakhta Park Premium LLC with Pavel Prigozhin as owner or director and Concord LLC with Evgeny Prigozhin as ultimate beneficiary.

How much does it represent?

Based on Bois Rouge’s website, we can see the company is trading a number of tropical essences: Azobe, Iroko, Mukulungu, Sapeli and Tali.

While it is difficult to build a full financial model, we know from the documents obtained Bois Rouge has a 30 year concession over 186,596 hectares of which about 137k hectares (1,370,000,000 cubic meters) are useable.

The first prices we can find are e-shop platforms. Looking at Alibaba.com, we can get a rough idea of how much each essence is valued:

Taking the hypothesis that 30% of the concession is exploited, the revenue potential could reach 890 million dollars on international markets, which is significant.

Even if such numbers should be refined and some inputs are missing, wood exports can definitely be a profitable business for the Wagner/Prigozhin galaxy and a way to bring back cash to a sanctioned Russia.

[EDIT: Bois Rouge’s plot size was clarified and an error was corrected]