The Serma – Yirma killings – Why documenting is important

Early May the All Eyes On Wagner project received from an anonymous source photos that circulated on closed What’s App channels at the end of March 2022 and one on Twitter on April 1st. The four photos show the bodies of two men who died violently in an incident allegedly related to Wagner mercenaries. Contrary to other countries where Wagner mercenaries have been involved and which are thoroughly documented online, it has become harder and harder to obtain photos or videos which could serve to document human right crimes linked to the Russian mercenary group. This analysis explores what can be done with 4 photos.

The four images below show the bodies of two men allegedly killed in an armed clash with FAMa soldiers, accompanied by at least one unidentifiable Caucasian man in camouflage uniforms. The elements visible in the photos (clothing, outfit, vehicles of the dead) and the information gathered suggest that the two men killed were fighters from the JNIM (“Jama’a Nusrat ul-Islam wa al-Muslimi”, a jihadist coalition affiliated with al-Qaeda), who were travelling on two motorcycles at the time of the confrontation. 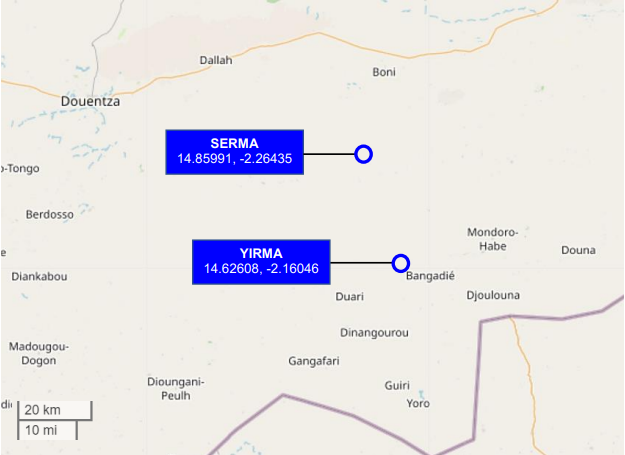 Analyzing photos to understand the situation 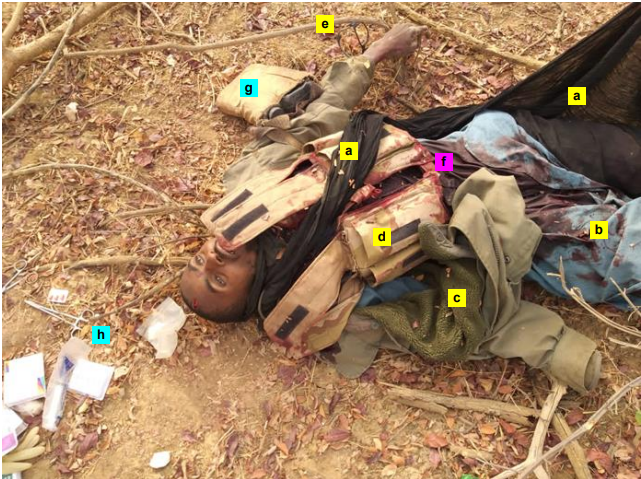 The image shows the body of a deceased young looking Black male (which will be referred to as « dead body 1 »), resting on his back. The man is dressed and equipped in classic JNIM fighter uniform. We note: a characteristic black turban (a), a blue tunic (b), a khaki lined jacket (c), a combat harness in sand colour for AK (d) assault rifle munitions and next to the body a pair of protective glasses (e). The man appears to have suffered a wound with massive bleeding in the level of the abdomen (.f.), possibly by gunshot, which may have resulted in death. Around the body, we note also on his left a sand-coloured satchel apparently containing a small canister (g) and above his head small first aid items (two pairs of surgical scissors, tablets, a plastic syringe, various compresses) (h), which may suggest that a first aid kit has been opened. 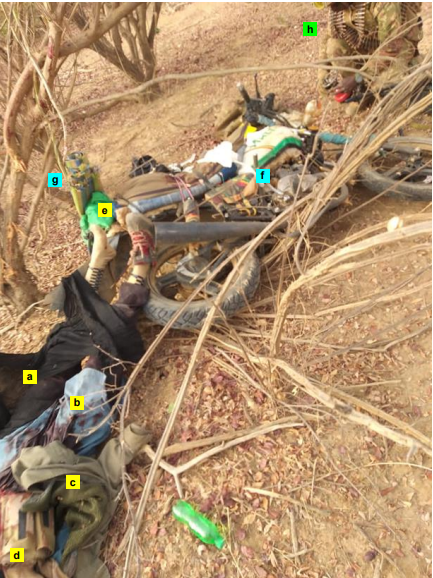 The image shows the same body as in Photo 1, identifiable by his black turban (a), his blue tunic (b), his khaki lined jacket (c) and his sand combat harness (d), elements already visible in image 1. The body seems to have been photographed from another angle, without having been moved between frame 1 and frame 2. Dead body 1 is wearing only one shoe on his right foot (e). At the feet of the body is a motorcycle probably 125 cc lying on its side on the ground (which will be designated as « motorcycle 1 ») (f), common transport mode among combatants of armed groups in Mali. On motorcycle 1 there are pieces of equipment and various bivouac items, like a folded mat (g).

At the top right of the photo, we can see a crouching black skin man (h), which will be designated as « unknown 1 ». Unknown 1 is dressed in camouflage combat uniform, a hat and carries a strip of 7.62 cartridges mm around the neck and torso. Unknown 1, whose face is not visible, is holding a small red “tea-stove”.

Stranger 1 who is holding a tea stove is not identifiable, but a comparison is possible between his combat suit and the one given to many units of the armed forces of Mali (FAMa), recognizable by their “Vegetato” pattern camouflage.

Official camouflage in many units of the Malian army is typical and corresponds to the “Vegetato” camouflage of Italian origin (unstructured, four-color).

The image shows the body of a second deceased Black man (to be referred to as « dead body 2 »). The body is half seated leaning on the exhaust pipe of a motorcycle, probably 125cm3 (which will be referred to as « motorcycle 2 »), standing on its crutch and easily identifiable by its pink and black colors (a). Unlike motorcycle 1, motorcycle 2 does not carry package elements, apart from a container fixed along the engine. On the saddle of motorcycle 2, a transmitter-receiver portable (“walkie-talkie”) VHF (b) is visible.

Dead body 2 is dressed in a traditional light blue linen tunic and short pants (c). On his shoulders, there is a sand-colored chest rig type combat harness unfastened (d). Between the legs of the body at the knee-levels, a piece of military clothing (trousers or jacket?) of

Regarding the armament, between the thighs of Dead body 2, we can observe a Chinese Type-56 assault rifle of 7.62 x 39 mm caliber (imitation of the AKM model) (f). The rifle seems to be in its wooden stock version, but the butt is missing. On the left side of the body, we also note in the sand a curved metal 30-cartridge magazine (g), a common magazine for this type of weapon.

Like Dead body 1, Dead body 2 has a significant amount of blood visible around the abdomen (h). There is also some blood between the nose and the upper lip ( i ). It can be noted that, contrary to Photo 1 and 2 (Dead body 1), Photo 3 (Dead body 2) may suggest a post-mortem displacement of the body in order to create a staging. Several elements could lead to think he was caught alive: motorcycle 2 standing on its crutch, the position of the assault rifle, the harness, the position of the arms of victim 2 (his hands were possibly tied behind his back).

Like Photo 3, Photo 4 shows Dead body 2, easily recognizable by its tunic and blue short trousers (a) and his sand-colored combat harness (b). In image 4, corpse 2 has been moved away from the motorbike. He was decapitated, and his head resting on his chest, in a macabre staging. The hatchet, having probably been used for the decapitation, is visible in the image to the left of the head (c). We also notice on the pants of the Dead body 2 a large bloodstain covering the groin and thighs (d), which did not appear in image 3. A bullet wound might be visible on his left thigh. The hypothesis of a post-mortem mutilation of the body at the level of the genitals between the two photos should not be excluded.

Regarding the environment of the body, motorcycle 2 is also visible to the left of the image (e), but has not been moved compared to photo 3 (which is demonstrated by the position of the pebble near the stand of the motorcycle). It is therefore Dead body 2 that has been moved by the protagonists to proceed to his decapitation. The arms position (the same as in photo 3) suggests that Dead Body 2’s hands were indeed tied behind his back.

At the bottom left of the image, we note in close-up the hand of a Caucasian type man (designated as « Unknown 2 »), we are coming back to it in the following section. Finally, three other individuals are visible in the image:

Two individuals at the top left of the image. The first (designated as “Unknown 3”), a Black individual (as can be seen from the color of his hand) is standing in front of the motorcycle 2 handlebars (h).

The other (designated as “Unknown 4”), who seems a few meters away, is crouched on the ground, back turned to the stage (.i.).

An individual at the top right of the image (.j.). This one (designated as “Unknown 5”) is standing and appears to carry a support weapon, light machine gun or submachine gun (the unfolded bipod of the weapon being visible on the image).

None of Unknown 3, 4, and 5 are identifiable, but they appear to be wearing outfits and/or combat gear, without recognizable camouflage.

Military operations in the area at the alleged time

To try to verify the information sent to us, we have looked at the reported military and terrorist activities in the area from mid-March to the end of March.

On March 11th, several accounts on social media reported gunshots would have been heard in Douentza city and at Boni military camp.

Several official communications from the FAMa give some indications that the FAMa are in the area. In a mid-March press release, a FAMa patrol enters into a fight in the Serma forest.

The FAMA Communication Directorate published press release N°025 on March 29th about an operation taking place on March 28th in the area of the Douentza circle.

In addition a local Kidal NGO posted on Facebook about the violences committed by Caucasian Russian speaking individuals against local populations in the area on March 27th. 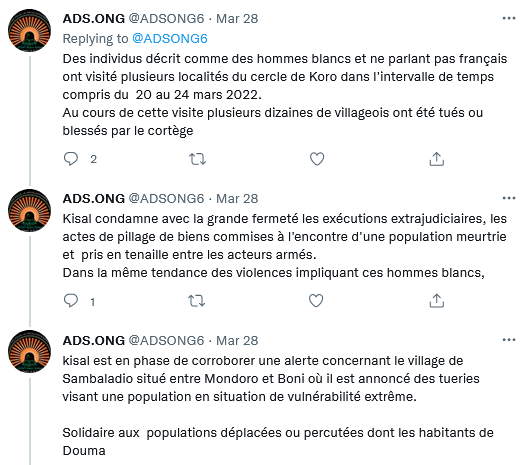 The map below sums up where incidents have been reported. They match with the location and date hypothesis. 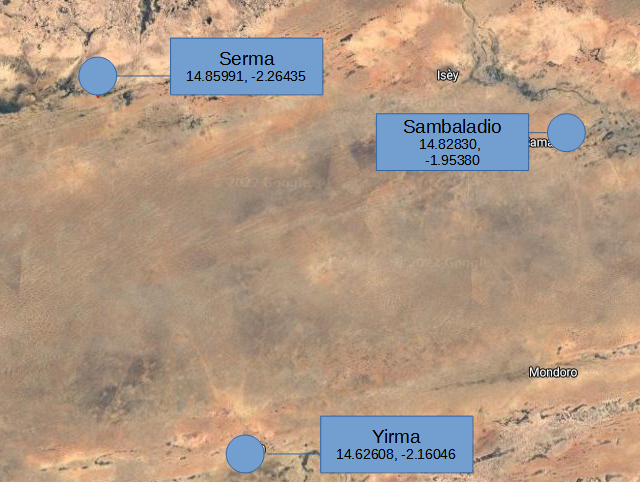 Caucasian hand in photo 4: circumstantial evidence and the need of photos and testimonies to document abuses

At the bottom left of photo 4, we note in close-up the hand of a Caucasian type man (designated as « Unknown 2 »), probably observing the scene and holding a smartphone (f). Unknown 2 is dressed in combat clothing (jacket and pants) in the camouflage pattern called « multicam » (g) (used by several armed forces for its effectiveness).

Wagner members are also known for using multicam camouflage in its Russian version (see photo below).

Wagner mercenaries in Mali as reported by RFI and Mediapart

In addition, areas have been limited to Barkhane and French forces since the end of December 2021 by the Malian junta: French forces are forbidden to fly above a specific zone which is comprised of Mondoro, near the alleged location of the photos. As a response to this restriction, the French authorities declared they will keep supporting Malian forces elsewhere – before being expelled – except where Wagner mercenaries are operating.

Thanks to these circumstantial elements, there is a high likelihood the information given by the source about the location/date is correct and the Caucasian hand which is visible on the photo is likely to be belonging to a Wagner mercenary. Yet more testimonies and photos are needed to fully verify and confirm this incident. Photos, videos, testimonies have now become paramount in Mali as claims of human rights abuses allegedly perpetrated by Wagner mercenaries have increased in the past few months. With systematic villages raids and dismissal of international journalists, it has been harder to document thoroughly incidents.